THE EVEREST – The World’s Most Valuable Diamond Encrusted Trophy 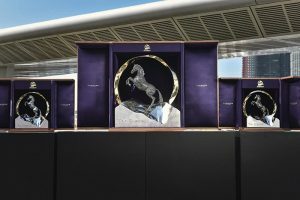 Racing NSW unveiled the diamond encrusted trophy, designed by Cerrone during an intimate ceremony. Some of racing’s biggest names gathered at The Darling for the first glimpse of this spectacular trophy in 2017. An exquisite piece, The Everest trophy features over 570 carats of diamonds and has an overall weight of 14kg of diamonds, gold and silver. Handcrafted in secret over several months, expert jewellers spent over 920 hours setting more than 8000 individual diamonds.

History was made at Royal Randwick, Sydney on Saturday, October 14 when 12 of the fastest horses compete in the inaugural 1200m sprint race. The Everest will be unique in Australian racing in that local and international buyers purchase a slot in the race at a price of $600,000.

The slot holders included individuals, racing syndicates and commercial businesses. Current contenders include Redzel, Chautauqua, She Will Reign, English, Fell Swoop and Houtzen. In addition to the main trophy which will go to the winning slot holder, the trainer and jockey will receive smaller versions of the trophy, valued at over $45,000 each.

Jennifer Hawkins in Cerrone diamonds at The Everest