Known as the earth’s most colourful gem,
A Tourmaline can be found in almost all colours of the spectrum.

They can also be found bi colour as well.  An example being, the famously referred to and highly sought after Watermelon Tourmaline, green on the outside and pink on the inside – how amazing is Mother Earth!

The Tourmaline is also known to strengthen body and spirit, particularly the nervous system.  Black Tourmalines in particular are known to deflect negative energy.

The gem also inspires creativity.  Poets and artists of years gone by have been known to have a Tourmaline on hand when creating. 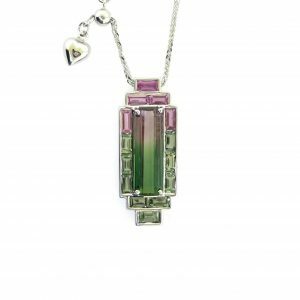